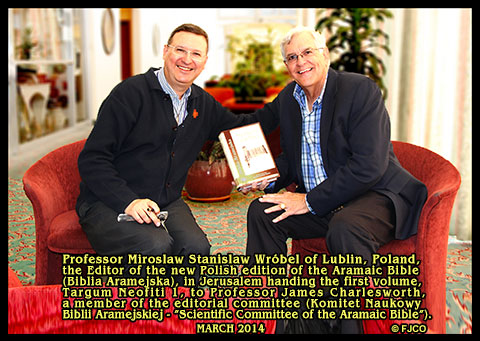 The photo shows Professor Wróbel presenting the first volume, Targum Neofiti 1, to Professor James Charlesworth, at their meeting in Jerusalem in March 2014.

After publication, Professor Wrobel promoted distribution of the Aramaic Bible in Poland, beginning in Jesziwa Synagogue (Lublin) with the Chief Rabbi of Poland (on 8 May), and following day, 9 May, at Catholic University of Lublin with Archbishop and University President.

As explained next in Dr. Charlesworth's comments, this is a universally usable, inter-religion Bible for study of the Hebrew Bible and New Testament translated from Aramaic in one volume.

The Aramaic Bible is the focus of the Polish Academic Research Project. Some chapters of the Hebrew Bible/Old Testament were composed in Aramaic, and that language became the lingua franca of Second Temple Judaism.

Aramaic was the language chosen to explain the archaic Hebrew to those living after Ezra when Hebrew was no longer the common language. Among the Dead Sea Scrolls were found Aramaic translations of Leviticus (4Q156) and Job (4Q157); these antedate Jesus and are the earliest Targumim. This noun designates the translations of the Hebrew Bible into Aramaic with added explanatory glosses.

Often scholars must turn to the Aramaic versions of the Bible to understand the earlier text; for example, in the first volume of the Polish Project the Nahash [eventually to become the serpent in Gen 3] is considered "wise" and not "crafty," which misrepresents the author's story. The Nahash was created by God as a beast of the field; and he could talk and walk. God's Word becomes clearer and more exciting as we study the Aramaic versions of Scripture.

Jesus spoke Aramaic. Many of Jesus' saying, translated from Aramaic into Greek for our New Testament, make best sense when we study the Aramaic original that is sometimes reflected in the Syriac New Testament, especially the "Old Syriac Gospels." Jesus and his followers often imagined the meaning of God's Word as they thought in Aramaic, as we do today in Polish, English, or our native speech.

FOUNDATION ON JUDAISM AND CHRISTIAN ORIGINS