THE DEAD SEA SCROLLS
A Brief Introduction for the Non-Scholar

The Dead Sea Scrolls are a collection of ancient manuscripts discovered beginning in 1947 in eleven caves just west of the Dead Sea. The scrolls appear to have been the property of a group at Qumran, a community of Jews who had moved into the wilderness in protest of what they saw as corruption among the establishment in Jerusalem. The group, which most scholars link to the Essenes, existed for over two centuries, from approximately 150 B.C. until Roman soldiers destroyed their settlement in A.D. 68. The scrolls they left behind, most of which are fragmentary, are written in Hebrew, Aramaic and Greek.

In addition to attesting to the beliefs and practices of the Qumran Community, the Dead Sea Scrolls have broadened and deepened our understanding of Second Temple Judaism. The texts in the library, composed by a variety of Jewish groups in ancient Palestine, present a portrait of Second Temple Judaism far more complex than scholars previously suspected. In addition, biblical texts among the scrolls provide witnesses to the Hebrew Bible more than a millennium older than the manuscripts which were previously available.

"Reading" the Scrolls has not been anything easy, contrasted against what one observes in a modern Synagogue when reading a Torah scroll. Here are some clear examples of the unclear challenge:

Rule of the Community: A sort of "manual" for membership in the Qumran Community, including rules of initiation and conduct. A hymn of praise at the end of the text deals with themes of righteousness, covenant, judgment, transgression, and forgiveness.

Pesharim: A series of scriptural commentaries composed at Qurman which interpret prophetic texts as relating to the history of the Qumran Community and the rise of its enemies. The longest surviving Pesher interprets the book of Habakkuk in this light.

War Scroll: Account of the great battle at the end of time in which the "Sons of Light" will march forth and destroy forever the "Sons of Darkness."

Thanksgiving Hymns: A collection of more than two dozen hymns, some composed from the perspective of the Qumran Community's Righteous Teacher. Like many Qumran texts, these hymns deal especially with the themes of judgment of the wicked, divinely imparted knowledge, and salvation for those in the Community.

Temple Scroll: A document containing regulations concerning the proper structure and ritual of the Jerusalem Temple, most of them adapted from Exodus, Leviticus, and Deuteronomy. The Temple Scroll is the longest scroll found at Qumran, measuring over 28 feet and originally containing 66 columns of text. 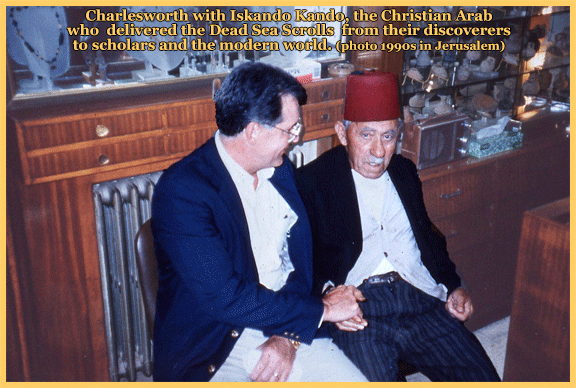